Allen Mite
Built by Glen "Howard" Allen
The first mite car that Howard Allen built was a collaborative effort which also involved two of his friends; Bob Scarsdale and Ed "Jake" LaMotta.  Bob Scarsdale drew up the scale drawings of the car based on photos of the famed Blue Crown Special of Indy 500 fame.  Jake LaMotta produced the wood patterns for the body and drive unit.  And Howard Allen performed the final machine work required to finish the cars.
A total of three cars were produced; one each for Allen, Scarsdale and LaMotta.  The polished car shown in the photos was originally owned by Bob Scarsdale.  There is no record of any of the cars having been raced.
A number of years later, Jake LaMotta produced a number of unpowered mite cars which were copies of the Allen Mite.  However, the name "Allen" cast in the pan of the Allen Mite was replaced with "LaMotta" in the LaMotta mites.
A second model Allen Mite was the sole effort of Howard Allen.  Patterned after the Kurtis Kraft Wynn's Friction Proofing Special that Johnnie Parsons drove to victory in the I950 Indy 500, the second model Allen Mite is similar to the first model in many respects.  Only three of these cars were built.  The car shown in the photos was owned by Constantine "Costy" Demikoff of Clifton, NJ. 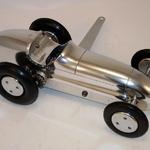 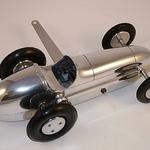 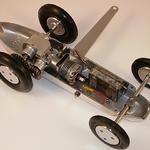 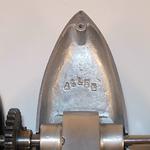 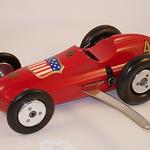 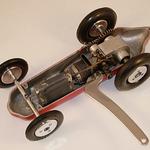