Martin .29 "Long Tail"
Produced by Martin Engineering Co.
Chicago's Anthony "Tony" Martin was one of the hobby's most prolific manufacturers of race car conversion kits and competitive racing mites.  His Martin Engineering Co. produced an early direct drive conversion kit for powering a Thimble Drome whip car with an Arden .09 engine.  That
was followed by a spur-gear drive conversion kit for powering the same car with an Arden .09 and, later on, other cars and other engines as well.
But Martin's real claim to fame resulted from his McCoy .19 powered Martin Flash race cars, an extremely successful car which set a record the first time it hit the track.  Martin sold the Martin Flash in semi-finished kit form, and the car dominated the .19-size mite class for years to come.
Martin followed up on the success of the .19-size car with scaled-up versions powered by .29 cubic inch engines.  And he even offered the .19-size Martin Flash with bolt-on rail guides and McCoy .09 engines for indoor rail track racing.
But the ultimate Martin-designed car was the Martin .29 "Long Tail", of which only three pans are believed to have been produced.  The yellow car shown here was finished by the legendary Franny Wolf and was his personal race car.  The original owner of the blue car is unknown, but the engine is one of Franny's modified Dooling .29s and many of the finishing touches on the car suggest that Franny may have built this car as well. 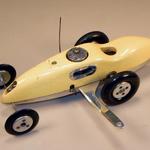 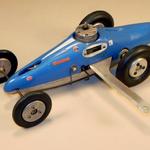 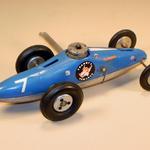 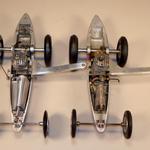 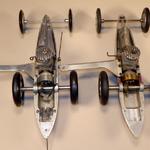