Dokey Mite
Designed and built by Joe Ellis, Sr.
During the early 1950s, Joe Ellis, Sr. of San Francisco designed and built a small number of McCoy .19 powered Dokey Mites.  The name of the car was taken from Ellis' son, Joe Jr., whose nickname was "Dokey".
The car is well engineered with a number of design features which contributed to its success.  The car has oversize pinion and axle gears which, because of their mass, negated the need for a separate flywheel.  The car has a cast aluminum body with a fairly short wheelbase and the engine is mounted near the center.  The result is a car that tracked smoothly because of the uniform weight distribution coupled with the  floating front axle.  The knife-edge front tires are Hely-Arc model airplane wheels fitted with roller bearings which are held in place with aluminum disks on either side of the wheel.  And the 2 1/4 inch diameter semi-pneumatic rear tires from a Thimble Drome Champion were ideally matched with the McCoy .19 engine and  a 1 1/2 to 1 gear ratio.
Even though only a handful were built, the cars proved to be very successful on mite car tracks from northern California to Kansas City.
The Dokey Mite shown in the photos was Joe Ellis, Sr's. personal car.  This car ran consistently in the 103 - 105 mph range and still holds the track record in its class at San Francisco's Golden Gate Park tether car track. 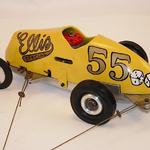 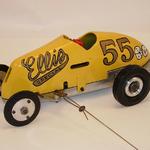 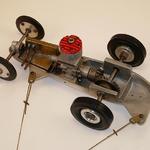