New Datsun  (Japan)
Designed, built and raced by Jiro Shimatani
One of only a handful of New Datsun cars built by Jiro Shimatani in 1948, this is Shimatani's personal car and undoubtedly the most successful example which was produced.  Featuring a cast aluminum body and separate grille, the car utilizes an independent rear suspension via a pair of swing axles and small coil springs.  The car is powered by a 1947 Model 12 OS .60 spark ignition engine powering the left front wheel via direct drive.  Like other Japanese tether cars of this vintage, the car was designed to race in a clockwise direction.
Jiro Shimatani was not only a race car designer and builder, but he was also a very competitive racer.  And what makes this car special is that it won the first All Japan Model Racing Car Contest held in December 1948.  Originally painted yellow with red trim, the car has since been re-painted black.  But photos from that 1948 event show Shimatani's New Datsun car at speed on the track, plus a photo of the car being clocked by the race timer using a hand-held stopwatch.  Another photo shows Jiro Shimatani after he received the "Victory" plaque given to the winner of the event. 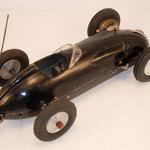 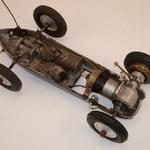 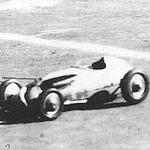 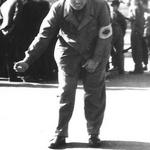 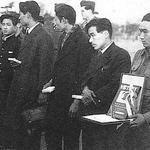